The 18-year-old emerged from a field of 144 competitors from 24 countries to seal the biggest victory of her amateur career, joining a roll of honour that includes Anna Nordqvist, Suzann Pettersen and the new Ricoh Women’s British Open Champion Georgia Hall. 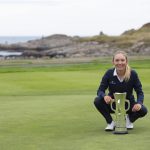 Following today’s success, Spitz has earned an exemption into Final Qualifying for the Women’s British Open next year and will bid to secure a place in the starting field for Woburn.

In front of a healthy crowd at the County Down links, Spitz raced into an early advantage in the showdown between childhood friends.

Spitz, ranked 59th in the World Amateur Golf RankingTM (WAGRTM) and almost 300 places above her opponent, moved to a 3up lead after five holes including a fine birdie two at the par three 5th.

A bogey at the 6th offered Holpfer hope and after both players birdied the long 9th there was more joy for Holpfer when a par was good enough at the short 10th to reduce the deficit to one hole.

With the spectators enjoying the action in the afternoon sun, Holpfer completed her comeback at another par-three, this time with a birdie at the downhill 12th.

Just when the 17-year-old had high hopes of adding to her Irish Women’s Open Stroke Play win in 2015, she handed Spitz the 13th hole after making double bogey.

Holpfer was then unlucky to strike the base of the flag with her approach to the 14th as the ball bounced to 15 feet from where she could only manage a half.

In a high quality match, Holpfer refused to give in and secured a seventh birdie between the players at the 15th to level once more.

However, bogeys followed at the next two holes to hand two-time Italian Women’s Amateur winner Spitz another notable victory.

Spitz raced into a four-hole lead after five holes as Berger struggled with the windy conditions. Berger claimed the 6th hole, but there was no way back as Spitz closed out a 5&3 win with a birdie on 14th and a conceded eagle putt on the 15th.

Holpfer faced a trickier test against England’s Charlotte Heath in the semi-finals after her two-hole lead after seven holes was pulled back to all square at the turn.

She ended the hopes of the English Girls’ Home Internationals winner with a strong back nine, however, and sealed a 4&2 triumph.

The 2019 Girls British Open Amateur Championship will be held at Montrose Links. —- Photo The R&A/Getty Images