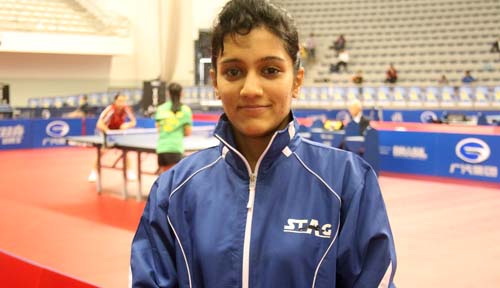 Santos, Brazil, June 14, 2012: Second year student at India’s Pune University, India’s Divya DESHPANDE was the player to attract the attention on the second day of play, Thursday 14th June at the GAC GROUP 2012 ITTF World Tour Brazil Open in Santos. She recovered from two games to nil to beat Ligia SILVA, Brazil’s leading lady who plays table tennis for her club in Santos.

Both were surprise wins; currently 22 year old Divya DESHPANDE stands at no.517 on the Women’s World Rankings, Ligia SILVA occupies the no.219 spot with Berta RODRIGUEZ being at no.303.

Furthermore, both Ligia SILVA and Berta RODRIGUEZ are players who have been in excellent form this year; both have qualified to compete in the forthcoming London Olympic Games.

However for Ligia SILVA there was consolation; she finished the group in second place and thus progressed to the main draw alongside Divya DESHPANDE. In the Women’s Singles event the players finishing in first and second places in each group progress to the main draw.

In the Men’s Singles event only the group winner progresses and there was a notable casualty. The host nation’s 17 year old Vitor ISHIY beat Timothy WANG of the United States in four straight games to top his group (11-6, 11-8, 11-8, 11-9).

Vitor ISHIY occupies the no.712 spot on the Men’s World Rankings; Timothy WANG is at no.397 and like both Ligia SILVA and Berta RODRIGUEZ, he has qualified to compete in the forthcoming London OIympic Games.

Otherwise matters went as anticipated with the leading names finishing their groups comfortably in pole positions.

In the Men’s Singles qualification event Ryan JENKINS of Wales and Belgium’s Lauric JEAN experienced few problems as did Lily ZHANG from the United States and Poland’s Kinga STEFANSKA in the counterpart Women’s Singles event.