By Nicolas Messner (IJF): Oct 2, 2016: The IJF’s fifth Judo Educational Journey started on Sunday in front of the Taj Mahal, one of the wonders of the world, in Agra, India. 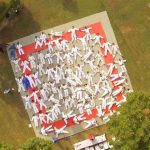 The latest tour has been organised by the IJF and the Indian Judo Federation and follows successful Judo Educational Journeys in China, Northern Canada, Oceania and Australia.

For the next two weeks a delegation of Indian officials, led by the President of the Federation, Mukesh Kumar, also General Secretary of the Asian Judo Union, and IJF representatives will travel throughout northern India to promote the educational values of judo. 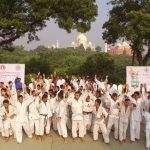 During the opening ceremony, Mukesh Kumar declared: “This is a fantastic opportunity for Indian Judo to promote the values of our sport throughout our territory, but it will also give a great virility to Indian Judo worldwide. Our sport is different from any other activity and our values are important for the society.“

For the first time, on the occasion of such a tour, the IJF delegation includes Ungvari Miklos (HUN), Olympic and world medallist, who came to share his passion and knowledge about judo. Nicolas Messner, IJF Media and Communication Director and Judo for Peace Director, is also among the IJF delegates. The whole tour is being filmed and will be featured within the IJF #JudoForTheWorld video series.

After the official opening which took place yesterday with all the judoka of the region, the first practical judo session took place today in front of the iconic Taj Mahal in a fantastic setup for the promotion of judo and its values. More than 100 judoka were present on the tatami and were able to benefit from Ungvari’s experience at the highest level.

Official tour mascot Tiger Otoshi (below) is accompanying the delegates on all stages of the tour to meet all judoka and communities across the country.

After Agra, the tour will move on to Haridwar, Dehradun, Jalandhar, Gurdaspur, Sonipat, Rohtak and Narnaul, before the final stage in New Dehli. After the India tour, the IJF delegation will travel to Nepal and meet the judoka who were affected by the earthquake that hit the country in 2015. —- IJF