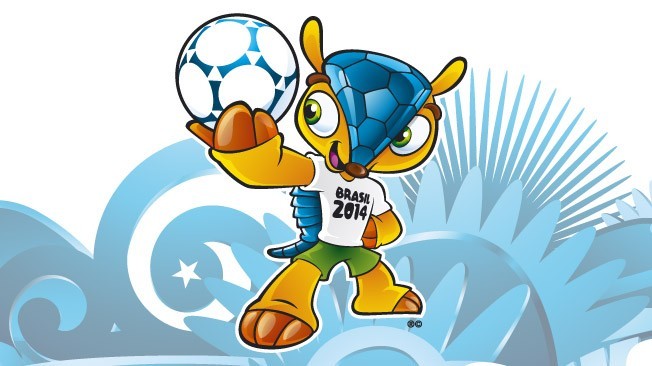 Rio de Janeiro – Brazil, Sept 18, 2012: FIFA and the Local Organising Committee (LOC) are excited to introduce one of the most high-profile ambassadors of the 2014 FIFA World Cup™: a unique Brazilian three-banded armadillo (the Tolypeutes tricinctus), a creature that is indigenous to Brazil.

The mascot was officially launched as part of Brazilian broadcaster TV Globo’s weekly Fantásticoentertainment show, where he was welcomed by Brazilian football legend and member of the LOC Management Board, Ronaldo.

“I’m delighted to welcome such an important member to the 2014 team,” said Ronaldo. “The mascot will play a key ambassadorial role in the next two years. I’m sure he will inspire many young football fans in Brazil and all over the world with the great passion which he has for the sport and for his country.”

The introduction followed a week of activities in which the mascot made a series of unofficial visits all over Brazil. This included the distribution of two thousand and fourteen blue balls, representing his unique blue shell, on the Boa Viagem beach in Recife, a meeting with his new friend Ronaldo in São Paulo, as well as high-profile introductions to Brazilian football fans through digital appearances during several live football broadcasts. The Official Mascot also has his own official song, “Tatu Bom de Bola”, sung by Brazilian music star Arlindo Cruz.

“The fact that the three-banded armadillo is a vulnerable species is very fitting.

The final mascot design was chosen after FIFA and the LOC had analysed 47 different proposals created by six different Brazilian agencies. The designs were further analysed through extensive research carried out amongst its primary target audience, Brazilian children between the ages of five and twelve, with the favourite being the armadillo, created by 100%Design.

“The fact that the three-banded armadillo is a vulnerable species is very fitting,” said FIFA Secretary General Jérôme Valcke. “One of the key objectives through the 2014 FIFA World Cup is to use the event as a platform to communicate the importance of the environment and ecology. We are glad to be able to do so with the help of a mascot who I’m sure will be much-loved, not only in Brazil, but all over the world.”

The Brazilian population will now have the chance to give the Official Mascot a name by taking part in a public voting campaign which will run up until the middle of November. The three options, which were decided upon after a vote by a high-profile judging committee including Bebeto, Arlindo Cruz, Thalita Rebouças, Roberto Duailibi and Fernanda Santos, are Amijubi – a representation of friendliness and joy – and two names which link to the ecological message, Fuleco and Zuzeco.

The Official Mascot is the latest in a line of iconic characters who have gone down in World Cup history. Following in the footsteps of the likes of Zakumi in South Africa in 2010, Germany’s Goleo in 2006 and all the way back to the days of World Cup Willie in 1966, the mascot is one of the key visuals of a FIFA World Cup, providing FIFA, the LOC and other stakeholders with a strong and exciting brand asset through which promotional campaigns can be activated and target audiences can be engaged. —- FIFA/Image © FIFA.com